Angelina Jolie is like a Goddess whose appearance is evergreen. Currently, the actress is preparing hard for her next film, The Eternals. However, before the shooting begins, we got a glimpse of the actress flaunting her beautiful skin for a project. 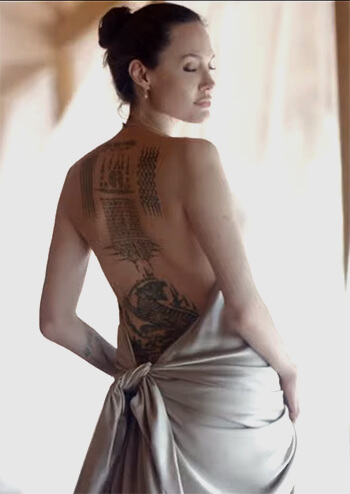 This time, it was for a perfume advertisement that shoots in Cambodia. It is a special place for Angelina as it’s her son Maddox Jolie-Pitt’s hometown.

In the ad, Angelina is seen in a backless silk gown and flaunts almost all of her tattoos. The actress reveals her heavily tattooed back as she puts in a very sensual performance to promote Guerlain’s new scent. Jolie has a lot of tattoos which has a deep sense for her. Previously Angelina said about her liking for tattoos that she is fond of this and this is body art.

While, speaking of ‘The Eternals,’ Angelina is training hard for the film. She has taken up sword-fighting as well as ballet to ace the role of Thena. Apart from Jolie, the film also stars Richard Madden, Kumail Nanjiani, Lauren Ridloff, Brian Tyree Henry, Salma Hayek, Lia McHugh, and Don Lee in crucial roles. The film set to kick the screens on 6 November 2020.

Natural Ways of Lightening Dark Knees and Elbows at Home

Disha Patani Reveals about Losing Six Months of her Life

Vidya Balan Shares about Playing the Role of Shakuntala Devi